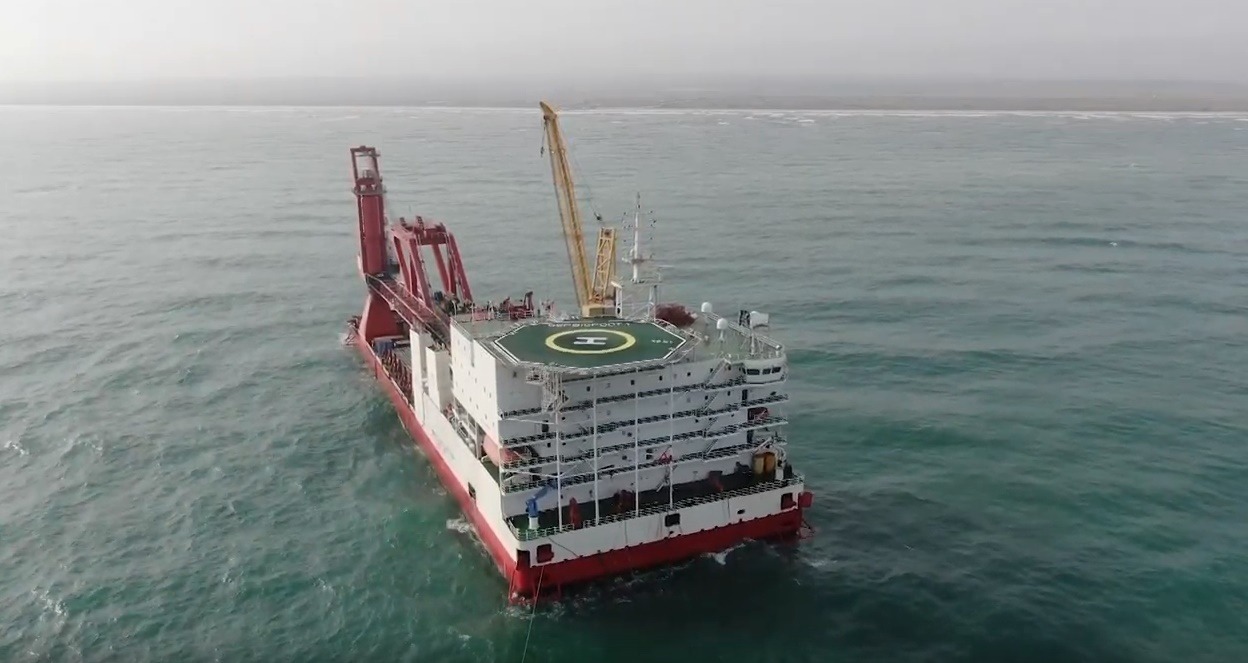 Black Sea Oil & Gas (BSOG) has completed the installation of the Ana natural gas production platform, about 120 kilometers offshore the Black Sea, the company announced in a statement Wednesday to Agerpres.

The Ana natural gas production platform is the first to be built and installed in Romania in the last 30 years.

“After the installation of the subsea pipeline and platform support structure in the first part of this year, the last component of the platform, the deck assembly, was successfully installed approximately 120 km offshore on the Ana field in waters 70 meters deep by Grup Servicii Petroliere (GSP). The Ana platform is a 3,000 tone natural gas production platform consisting of a jacket structure that is partially in the water and a three deck assembly above the water. Gas from the Ana and Doina fields is collected and metered on the platform, then sent ashore to the Vadu gas treatment plant via a 16-inch pipeline over a distance of 126 km, including 121 km of subsea pipeline and 4.5 km of onshore pipeline. The platform is minimally equipped and will be fully automated. With all the infrastructure now in place, connection to the facilities and commissioning will take place in the coming period, ahead of the drilling campaign expected in November this year,” the release said.

The Midia Natural Gas Development Project (“MGD Project”) is 70% completed and is the first project of its kind built in the Romanian Black Sea area after 1989. The works consist of the drilling of five production wells (one subsea well at the Doina field and four production wells at the Ana field) and a subsea production assembly at the Doina field, which will be connected by an 18 km pipeline to the shore-based monitored and operated Ana production platform at the Ana field.

In addition, a 126 km subsea pipeline will transport gas from the Ana platform to shore to the new gas treatment plant in Corbu commune, Constanta county.

According to the source, the estimated production capacity will be one billion cubic meters of gas per year, equivalent to 10% of Romania’s gas consumption. The treated gas will be delivered to the National Transmission System operated by SNTGN Transgaz SA at the gas metering station located within the gas treatment plant.

“We have taken another step towards Romanian gas supply for Romania. This project in the Black Sea demonstrates the unique opportunity that only Romania has in the European Union to become gas independent and therefore reduce its growing dependence on imported gas. The MGD project also allows for the economic and rapid development of other gas discoveries made in the Romanian Black Sea continental shelf by other concessionaires within the timeframe expected for the use of natural gas as a transitional fuel and also provides valuable infrastructure for the transition to green energy production,” says Mark Beacom, CEO of Black Sea Oil & Gas.

In the same context, Grup Servicii Petroliere (GSP), the main constructor of this first development project for the extraction of new hydrocarbons in the Romanian Black Sea area, pointed out in a press release that the topside of the Ana platform weighs over 1,350 tones and was fabricated in the GSP Agigea shipyard and installed on the metal structure fabricated and installed by GSP this spring.

“The Midia Gas Development project, together with other strategic projects for the Romanian energy system, are the real and, here it is, feasible solution to the Romanians’ need for cheap energy. If we want to protect Romanians from rising energy prices, we need to invest in new and sustainable projects. We, GSP, have demonstrated that we have the capacity and capabilities to respond to any challenge in a complex project. Our mission in MGD continues. We still have work to do. We hope to start drilling as soon as possible and complete this integrated project that we are committed to bring to fruition,” said Gabriel Comanescu, President and CEO of GSP.

The topside manufacturing phase has trained hundreds of human resources, from engineers and designers to welders, locksmiths and electricians. GSP’s specialists and experts worked under extreme conditions off the Black Sea to complete the installation of the platform without incident.

The topside has three decks and a helipad.

Grup Servicii Petroliere is the main contractor of this first development project for the extraction of new hydrocarbons in the Romanian Black Sea area. The company owns and operates the most powerful floating crane in the Black Sea basin, the GSP Neptun, with a capacity of 1,800 tones. The GSP group currently employs more than 2,600 experts and specialists worldwide.

Black Sea Oil & Gas (BSOG), owned by Carlyle International Energy Partners and the European Bank for Reconstruction and Development (EBRD), is an independent energy company based in Romania with operations in the development of natural gas resources.

Currently, the company’s portfolio consists of the MGD Project and two natural gas production licenses, the Ana and Doina fields in the XV Midia – Shallow Water Zone perimeter in which BSOG holds a 70% stake.