OFFICIAL Turnaround in the tender for Section 2 of the Sibiu – Pitesti Motorway: Out of six qualified builders, only the Turks from MAPA submitted a bid for the execution of the Boița – Cornetu section/ The tender, based on a 2008 feasibility study

A turnaround in the tender for the design and execution of Section 2 of the A 1 Sibiu – Pitesti motorway after, out of six qualified contractors from whom CNAIR was expecting offers for the next stage, only the Turks from Mapa submitted a bid today, at the 3pm deadline. One of the possible explanations for the withdrawal of the EU contractors is the Feasibility Study which is too old (2008) and which, for such a complicated project, can lead to unforeseen elements on site.

As early as 2013, a Jaspers report (European Commission consultant) highlighted the need for additional drilling and the shortcomings of the geotechnical study, because a quality study is essential to the smooth running of the project.

About the too old SF, the Pro Infrastructure Association drew attention as early as 2017: “We have heard many times, both from Mr Ionita and from Minister Cuc, that the 2008 study is a mature one. A study in which geotechnical investigations for tunnels are limited to one borehole at each end of the tunnels, as is the case of the 1.7 km long Poiana Tunnel, cannot be called “mature”. How can a builder tender without knowing the composition of the soil in this tunnel and the technical solutions to choose for its construction? (e.n. – The Poiana Tunnel is on Section 3)”.

In the first phase of the procedure there were 11 contractors, then in July, in the restricted tender, CNAIR selected six associations and companies:

“On Wednesday, 20.10 2021, the submission of tenders for Stage II (Technical Proposals and Financial Proposals) for the tendering procedure for the contract “Sibiu – Pitesti Motorway, Section 2, Boița – Cornetu” took place. By the deadline for submission of tenders, the following tenderer had registered: Association between MAPA INSAAT VE TICARET A.S. – CENGIZ INSAAT SANAYI VE TICARET A.S. Please note that Stage I of the restricted tendering procedure “Design and Construction “Sibiu – Pitești Motorway, Section 2: Boița – Cornetu” was completed on 23. 07.2021 and the Invitations to Participate in Stage II of the procedure – Tender Submission Stage were also sent to the 6 Candidates pre-qualified at the first stage. Interested economic operators had an initial deadline of 2 months for the preparation of bids (20.09.2021), which was subsequently extended by another month, until 20.10.2021, thus ensuring a more than sufficient period for the preparation of bids”, the National Road Company announced.

After two postponements, NCRIA can no longer extend the deadline again, as the MAPA offer has already been submitted, which means that its evaluation starts now. This is a complicated situation because it would mean that one of the most difficult road infrastructure projects in Romania would be awarded to a contractor who has never worked on the country’s construction sites.

Section 2 of the A1 Sibiu – Pitesti motorway is 32 km long, with an estimated cost of between 4.6 and 5.2 billion lei, and will take 18 months to design and 50 months to build. The tender was launched in December 2020.

This section contains the main works:

– Ecoduct in the Lazaret area.

MAPA portfolio: according to information on the Company’s website, the Mapa Group has 40 years of experience and works in Europe, Asia, Africa and the Americas in the fields of construction, hotels, renewable energy, airports and air cargo (CARGO). In terms of motorways, the contractor mentions the Trabzon and Hopa motorways in Turkey or the Djen Djen-El Auma in Algeria. 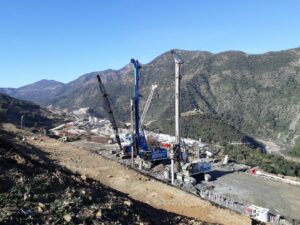