The Cluj subway will cost €2 billion and take 8 years to complete. Subway trains will arrive at stations at 90-second intervals 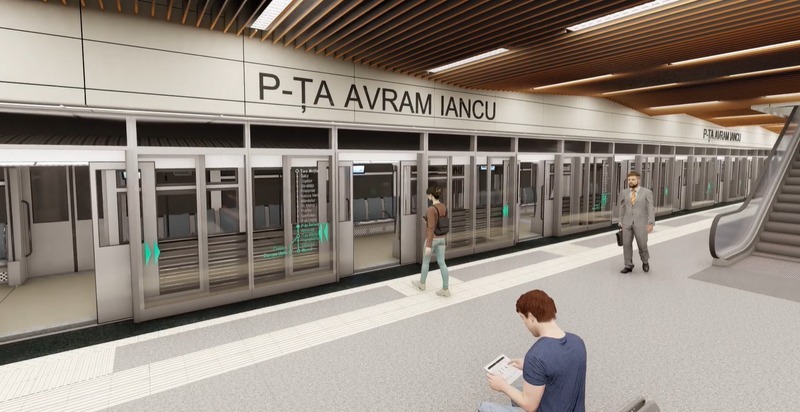 M 1- The Cluj Napoca metro line, 21 km long and 19 stations, will cost 10 billion lei (2 billion euro) and will take 8 years to complete, according to the Ministry of Transport, which has published the draft Government Decision approving the technical-economic indicators. Of the 19 stations, the 9-station central section between Europa Unita and Sfânta Maria (7.5 km) is financed by the PNRR with €300 million, but only includes structural works, without installations, track or automation. According to the document, trains will run at 90-second intervals and the capacity will be between 15,000 and 20,000 passengers, less than half of the capacity designed for the M 5 and M 6 Magistrals in Bucharest: “the construction of a light rail line with 19 underground stations in rail track technology, with a nominal/maximum transport capacity at 90-second intervals: 15,200/21,600 passengers/hour and direction (40 trains/hour and direction) and an underground depot.” says the Ministry of Transport.

Cluj Napoca is the second largest city in Romania in terms of the number of inhabitants and the traffic volumes on the DN 1 Florești – Cluj Napoca are comparable to those on the DN 1 Otopeni – Bucharest (6-lane road), according to the Explanatory Memorandum: “The municipality of Cluj-Napoca is a growth pole, being the largest city in Romania after the capital Bucharest and with the most dynamic population growth, according to the latest INS census. The neighboring localities of Cluj-Napoca, Florești, Apahida, Baciu, have also experienced a marked development, which has led to an increase in traffic values between them and Cluj-Napoca. In terms of the stable population, the trend is continuously increasing in Cluj-Napoca and explosive in Florești. The existing road network of Cluj-Napoca and, implicitly, the transport network, cannot ensure the necessary for the socio-economic dynamics, which has led in recent years to an increase in traffic congestion not only on the main east-west, west-east axis of Cluj-Napoca, but also on the access roads to/from the municipality from the neighboring localities of Cluj-Napoca. The west-east axis of public transport shows on certain sections load values of almost 6,000 passengers per hour and direction. This value is the upper limit for which public transport can be provided with a “classic” mode: bus / trolleybus / tram that shares partially or totally the track with the general transport one, and that has level intersections with other transport axes…Also, the metro is vital for accessibility to the new Regional Emergency Hospital. The construction and equipping of the Cluj Regional Emergency Hospital is included in Romania’s Partnership Agreement with the European Commission for the period 2014-2020 and is planned to be financed through the Regional Operational Program 2014-2020 and the Regional Operational Program 2021-2027.”

The route of the M 1 Cluj Napoca Metro Station:

Two weeks ago, the local authorities of Cluj Napoca approved the Feasibility Study: “The route option recommended by this study is: Florești – Unirii Square – Mărăști Square – Muncii / Europa Unita – Sopor Depot. The route will be 21.03 km long and will have 19 stops.” announced Mayor Emil Boc.

The financing of the investment objective is made from non-reimbursable external funds from the state budget through the budget of the Ministry of Transport and Infrastructure, as well as from the local budget of the Municipality of Cluj-Napoca and the Municipality of Florești, within the limit of the amounts approved annually for this purpose, as well as from other legally established sources, according to the public investment program approved by law.