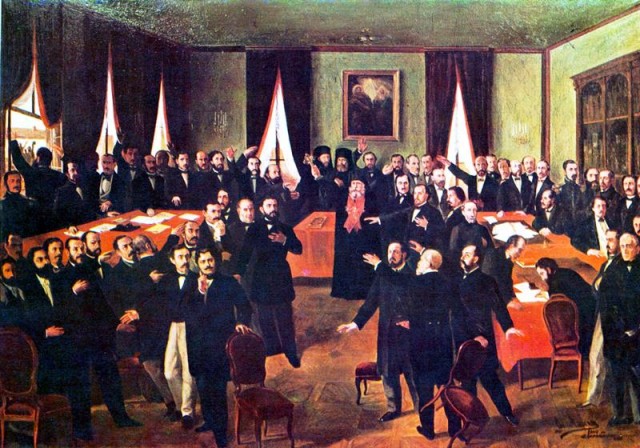 The Little Union, as the union of the principalities of Wallachia and Moldavia was known in history, began on 5 January 1859, when Alexandru Ioan Cuza was appointed ruler of Moldavia and was completed on 24 January when he was given the same role in Bucharest. From then on, one can speak of a Romanian identity in Europe, although the question was open, since 1774 since the Treaty of Kuciuk-Kainargi, when the autonomy of the two principalities was confirmed in the Ottoman Empire.

Eighteen years after the unification, independence from the Turks also took place, although the two provinces had in fact been under Russian influence since the early 19th century. In fact, it was the Russian general Kiseleff who ruled the Principalities and tried to bring order to their administration and economy until around 1834.

Since we are talking about the Litle Union, however, let’s go back to Cuza. He ruled over two backward, deeply rural (about 80% to under four million inhabitants), still feudal countries at the height of the European bourgeois revolution.

Politically speaking, Cuza is credited with opening the first Parliament in 1862 and laying the foundations for the construction of the nation-state and the removal of feudalism.

And this at a time when almost two-thirds of the arable land was owned by the Boyars, the monasteries had 21% and the remaining 15% was controlled by the free peasants.

Between 1862 and 1866 the great reforms of the state were initiated, and Cuza secularised the monasteries’ estates in 1863, so almost a quarter of the land became state property, which later expropriated the peasants, abolished the obligations to the landlords, the percentage of the peasants’ produce called the “dijma”, and created classes of peasants according to wealth (by the number of cattle owned).

He also carried out land reform, which, adopted in 1962, was not necessarily a revolution, as the ruling conservatives wanted to keep as many of their privileges as possible.

As Romania at that time was closer to feudalism than to modernity, especially as the conservatives were in power, it was necessary to introduce laws for administrative reorganisation, for the construction of railways, and rules that stimulated the formation of a body of experts in various economic fields.

As early as 1859, economists realised the importance of investment to the health of an economy. On the plus side, there was then available domestic capital from agricultural exports.

In addition to this domestic capital, which was insufficient, however, the politicians of the time also attached greater importance to foreign capital. In 1865 the concession for the construction of the railway linking Bucharest to the Danube at Giurgiu was signed. As for roads, the most important fact is the contract for the construction of 19 metal bridges by the English.

The Union of the Principalities and poverty

The two principalities were poor, unproductive, and backward. While they were doing well agriculturally, although – as today – they were inferior to western countries, in industry they were 200 years behind the great powers.

The Austrian and Ottoman Empires were the main business partners, and the total exports of the Romanian Lands were less than 120 million lei, while imports amounted to 71 million lei. These figures are for the period 1859-1866.

So, Alexandru Ioan Cuza had an extremely difficult mission which, fortunately, most of the population understood. The priority was to synchronise the economies of the two countries, as far as one could speak of an economy at that time, since they were predominantly agrarian countries, trade was in fact commerce, and industry was still in its infancy.

Moreover, after the Union, it was time to modernise the country. A tax reform was undertaken in 1861, writes Digi 24, by introducing a personal tax for adult men, coupled with a land tax.

A contribution for roads was also introduced, a sign that the intention was to develop the country’s infrastructure, the land tax, and other measures meant that by the end of 1861, on the eve of their full administrative-political unification, the United Romanian Principalities were equipped with a relatively modern tax system.

Interestingly, as early as 1859, economists realized the importance of investment for an economy. Fortunately, the Romanian Countries had some capital at their disposal, thanks to the export of agricultural products.

Adopting the Leu as the national currency

These were important and difficult reforms to put into practice, and it was not until 1862 that the Union became effective and a functioning state with a single government was established.

However, Romania lacked its own currency, and Cuza and his entourage began preparations for the establishment of a monetary system in the very year of his election as ruler, 1859.

In a document of 18 November of the Council of Ministers of the government of Muntenia, the name ‘romanat’ appears for the eventual currency, which was copied in size and weight from the French franc. On the basis of the document, a draft law was drawn up in 1860 stipulating that gold, silver, and brass coins would be minted, but the initiative was blocked by the Great Powers following protests from the Ottoman Empire.

It was not until a year after Cuza’s abdication, on 22 April 1867, that the national currency, the leu, was established by law.