VIDEO A1 Sibiu – Pitesti motorway: Works on the Sibiu – Boița section have exceeded the 50% physical stage. The 13-kilometre section will be open to traffic at the end of next year 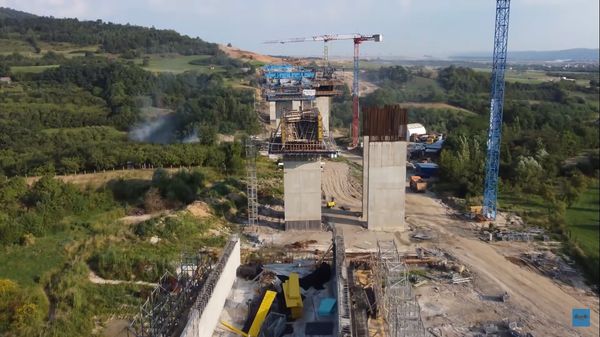 The construction site of the first segment of the A1 Sibiu – Pitești motorway has passed the 50% physical stage, with the Austrian PORR builder concentrating its efforts in the area of the viaduct at Tălmăcel, with a length of about 650 metres, according to information published by the Regional Directorate of Roads and Bridges Brasov. Traffic is expected to open at the end of next year.

“The physical progress of the construction site for Lot 1 of the Sibiu – Pitesti Motorway has exceeded 50%. The contractor is working on all fronts but the greatest concentration of forces is in the area of the Tălmăcel viaduct and the surrounding excavations”, DRDP Brasov announced today.

The Sibiu-Boița segment with a length of 13 kilometres includes:

The contract for the design and execution of the first lot of Romania’s most awaited motorway was signed in April 2019 with the Austrian contractor Porr for €129 million, i.e. €10 million per kilometre. The works started in spring 2020 and the execution period is 3 years.

The second section of the A1 Sibiu – Pitesti motorway is the 30 km long section 5 Pitesti – Curtea de Argeș, where the Italian contractor Astaldi has recently started work. The middle sections – 2nd, 3rd and 4th (most difficult ones) – are at various stages of evaluation or appeals.